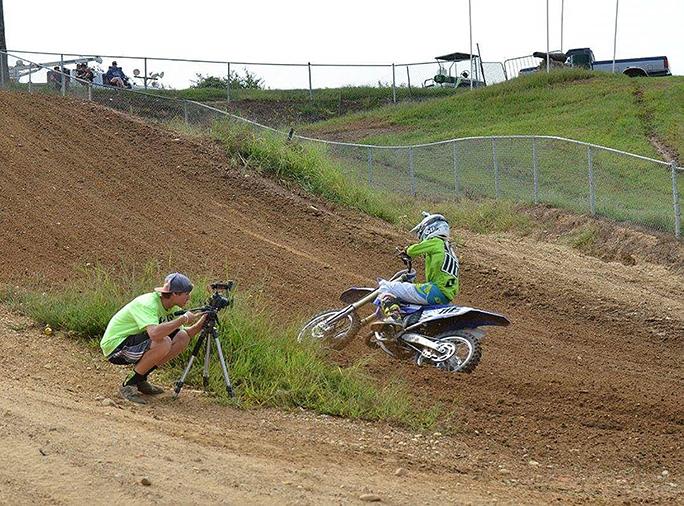 1551 students go to Woodgrove High School. Peers see each other nearly every day for four years, but how well do they really know each other? So many students have hidden talents and unique abilities, and now it is time to bring one student’s talent to light.

Kyle Miller is a junior with an interesting extracurricular activity. He runs his own freelance videography business that specializes in action sports such as dirt biking, skateboarding, BMX, snowboarding, surfing, etc. that gains more and more exposure every day.

“I got into it last September. I had just broken my arm and had a lot of time on my hands to just sit around and do nothing. I had been into video stuff off-and-on, just experimenting since fifth grade but I could never really keep an interest in it,” said Miller. When a large media outlet called Vurbmoto released a contest where they gave all of the footage from their most recent movie out to the public to edit and create videos, Miller decided to submit one. It was called the META edit contest.

“I didn’t win anything since I was just getting into it, but it showed me that I could create awesome videos from action sports,” said Miller.

Miller decided to take his friend, sophomore Kyle Dant, to a local track in Hedgesville, West VA, and “just recorded everything with my GoPro Hero 2, trying to use techniques I saw in the film from the contest.” He got permission from everyone he filmed, and put all the files together to make a video, which all the athletes really liked.

After he made the video it wasn’t long before he had purchased about $1000 worth of gear, and soon developed a good reputation among riders and customers.

The gear he bought, which he calls “must-haves,” was a Nikon d3300, a few lenses, a tripod, a more powerful computer, a microphone, and separate audio recorders for interviews. At first, his clients were people he knew, but as his name got out, clients began to find his Instagram page (@senditfilms) and started emailing/sending direct messages for video requests. Athletes of all ages hire Miller to make videos for them.

“Sometimes they are young athletes, as young as 6 years old, and I have also had guys over 50 years old that want a video. Everyone wants to see themselves, no matter what age.” said Miller.

Each video is different, and Miller has a routine in which he makes them. First, a client sends him an email or a direct message and then Miller schedules when to film them.

“Sometimes I will film them on practice days if that’s what they want. Or, for example, during motocross races they tell me their name, number, and classes, then I film them during their race.”

The next step is downloading all the video onto his laptop and sorting through the files from the day into individual folders for each client. When that is complete, if they want music for their video, the client chooses a song. Miller has long lists of songs that he knows are good, and the video is created around the song.

“Once I am finished I upload it to dropbox and create a custom folder for each client, where they can easily download and share that video. If I like it and if they approve I post it on my social media pages as well,” said Miller.

The prices of the videos vary depending on what the client wants. For short Instagram edits Miller has been charging $20, but he will be changing the price up to $30 this winter. A 2-4 minute video is normally $150-$300 depending on the criteria for the video.

However, Miller isn’t only in it for the money; he likes making videos and interviewing athletes.

“I enjoy it a lot because I get to meet a lot of really cool people/athletes. It can be hard at times keeping up with deadlines and such but that’s what keeps it exciting,” said Miller.

However it is not always exciting, and Miller said sometimes he can get tired or lazy after working on a video all day.

“It took me a while to realize that sometimes it’s better to just step away and come back to it the next morning with a fresh mind and ideas than to push forward at 3 am. Also, who knows, sometimes I can get cool inspiration or ideas just from sleeping and dreaming. I never know what will inspire me.”

Not only can the work get tiring, but it keeps him busy. Balancing the business and schoolwork was a problem when school started. Since schoolwork takes precedence Miller has had to push back his timelines on videos. During the summer, the turnaround time was one to two weeks per video, but when school started he began to tell his clients it would take closer to two to four weeks, depending on how much homework he had. Even though it can be difficult, Miller said he plans on continuing his videos after high school.

“I am still debating If I want to possibly take a break for about a year after high school and focus on expanding ‘senditfilms’ as a business, or go to college and expand my knowledge more before continuing with it.” said Miller.

Miller would like to go to either JMU or VCU because they offer the two best digital cinematography degrees in the state, which is what Miller is working towards.