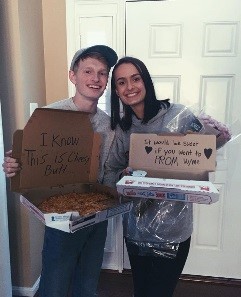 Written by Hailey Dunster and Hannah Schneeberg, The Woodgrove Outlander

Sparkly dresses, smooth tuxes. Pounding music. Flashing lights. Prom is a major high school event that some students look forward to since their freshman year. Juniors and seniors are hoping to be asked to prom in the perfect way. The rising trend of prom proposals suggests that boys are now expected to ask girls to prom with creative signs or even gifts. Most of the female students interviewed said that they hoped to be asked to prom. This year’s prom is at the National Conference Center on May 21, 2016 and has the theme “Twilight Woods”

In preparation for Woodgrove’s prom, Loudoun Valley student, Jamie Heuer, asked his girlfriend, junior Rachel Pack, to prom in a creative way. Heuer showed up at Pack’s house with a box of Domino’s pizza and breadsticks. Inside the boxes it read, “I know this is cheesy, but it would be sweet if you went to prom with me.”

“The season of prom proposals is just starting,” says sophomore Gabby Miller, “Everyday on Instagram and Twitter there are new pictures of girls and the grand gestures their dates made to ask them,” said Miller. “Even at my tennis match at Stone Bridge High School, my opponent got asked with a sign that read, ‘Would you be my doubles partner to prom?’ Witnessing the prom proposal was fun, but some girls get too caught in the big proposal part of prom.” Many girls like the idea of a promposal being personalized, similar to the one at the tennis match. “I think a lot of girls are too worried about the way that they’re asked to prom, it already takes enough guts for the guy to even ask them,”says junior Eric Deberry about the difficulty of asking girls and coming up with the elaborate ideas.

To some students prom is the epitome of high school and to other students it’s just another over dramaticized event.  “I think all of it is overtop, the signs and the flowers. It’s not a marriage proposal. You may not even like the guy, and once prom is over you no longer want to continue the relationship,” says assistant teacher, Mrs. Rochek.

Sophomore Andie Matthews wouldn’t mind being asked to prom, but she says “I think students put too much pressure on each other to be asked to prom in the perfect way by the ideal boy,” says Matthews. ”Just go with a group of friends and have fun, you only have one senior prom.”

“People do the big prom proposals because of the social pressure of it all,” says Senior Jack Klimek, “girls could ask guys if they wanted to, most guys would like it, but none of the girls actually will ask.”

The male students interviewed agreed that they wouldn’t mind having a girl ask them to prom, whereas 10 out of 10 female students agreed that they want to be asked. “Generally the guy should ask the girl to prom,” argues Miller, “it’s the way it’s traditionally done. It also gives the guy a chance to behave like a gentleman”