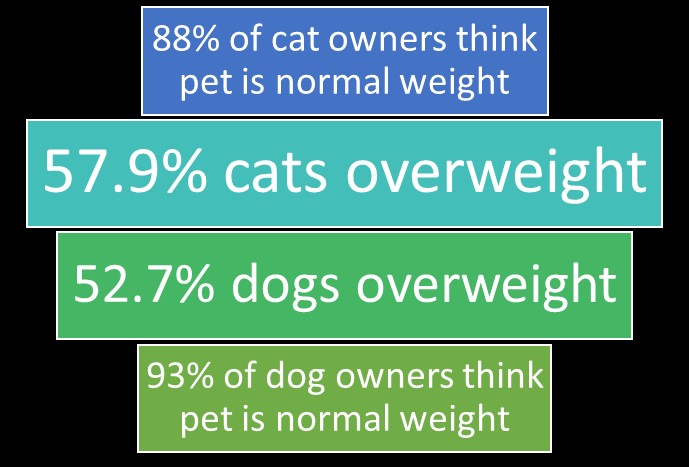 The chubbier and fluffier the animal, the cuter they are, right? While this may be the case, owners need to prevent their pets from becoming too fat.

Just as more humans are becoming obese, the same is true for household pets. According to the Association for Pet Obesity Prevention, in 2014, over half of all dogs and cats in the United States were considered obese. Thirty-five out of seventy-seven million dogs are overweight, and seven million are considered obese. Over fifty-seven percent of cats are obese. Although this may make an animal seem even cuddlier, there are serious health problems that can arise later, so owners should try to prevent the obesity in pets.

Woodgrove parent, Kim Borsuk, has an obese pet, a fat cat. When asked how she first noticed that he was overweight, she responded, “Tas is a lot more lethargic than a regular cat would be. I saw his belly jiggling as he ran around. It’s a little concerning. I’m afraid he’ll have heath issues.” Despite this, the Borsuk family has not yet taken Tas to the vet, but they did put him on a strict diet.

In many cases, people don’t realize their pet is as big as it is. Because owners are around their pets daily, they often don’t notice the subtle changes in their pet’s size, until obesity sets in. This problem sets pets up for future health problems. This situation was true for Kasee Sheehan, the owner of an obese dog, Mason.

“My mom sent me a picture while 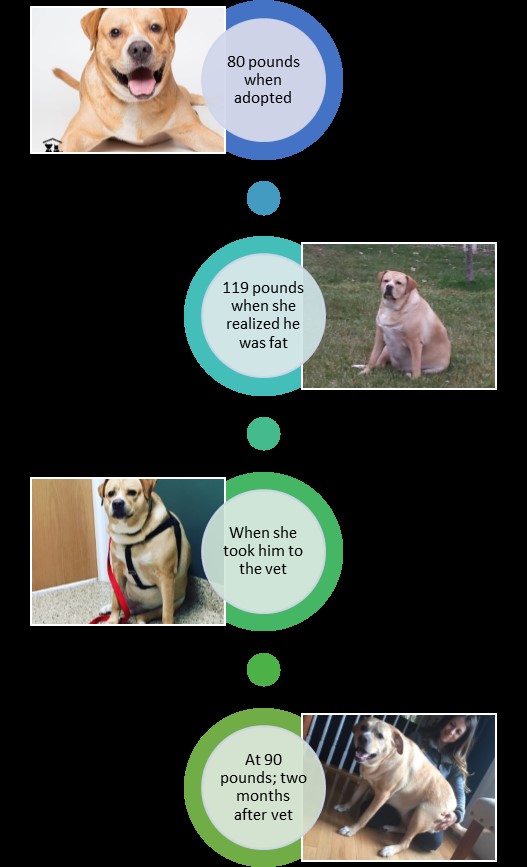 we were on vacation. I was shocked.” It was then that Kasee realized just how fat Mason had gotten over the past several months.

“We used to be able to walk five miles a day in the fall, but then he could only walk three miles. He also snores, holy cow, he snores.” These changes in Mason’s behavior are what made her scared that something was wrong and prompted her to go to the vet.

“I cried when I first took him to the vet. I just wanted him to be happy, and then I made him so fat.”

At the vet, doctors examined Mason’s thyroid and blood sugar levels. Doing these tests allowed the veterinarians to determine if the whole cause of weight gain was from over-eating, or if other factors contributed to the rapid increase in weight. As the results showed, Mason had neither diabetes nor an under-active thyroid, showing that the entire gain was due to over-eating and getting neutered at the age of four.

Luckily for Sheehan, she was able to recognize the obesity and go to the vet to stop any future health issues. “The vet suggested to take him to swim lessons, but he doesn’t like the water, and I couldn’t get in with him, so it didn’t work. We’re now on a low-calorie, less food diet, and we use carrots or green beans as treats. He’s back up to walking five miles a day.”

Purina started a research experiment where they tested how two groups of dogs’ lives differed depending on the food they ate. Both groups had the same food type with all the nutrients and proteins needed to sustain a healthy life; however, one group was fed two bowls at a time instead of one. At the end of the experiment, researchers saw that the dogs who were fed more food were more susceptible to illness and disease along with body problems.

Employees at Vets at Hoof and Paw Veterinary Services clinic explained how the biggest concern for obese animals is the dislocation of hips and jaws. Surgery to replace the joint is five thousand dollars. They also said that getting a pet fixed can affect weight growth. If an animal gets fixed too early or late, the muscles can be damaged, causing rapid weight gain.

Sheehan and Borsuk have some advice to help others prevent their pets from becoming obese.  According to Mrs. Borsuk, “Don’t get a cat but, if you do, ration the food.”

Sheehan added other important tips: “Communication with spouse, don’t feed the animal as much as you think it needs, and zero human food.”

Although this is a serious matter, both pets have become a laughing matter. “I still love Tas, but I make fun of him.” Sheehan said, “He’s our family joke. He was the main point of conversation at my grandma’s birthday party. Everyone was making fun of him.”