New Clubs Take a Stand Against Bullying and for Human Rights 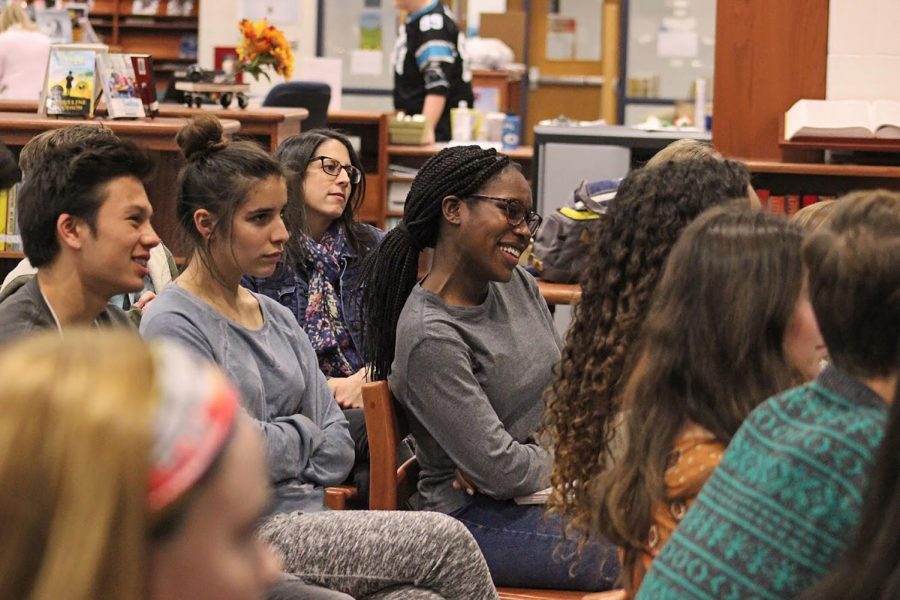 Students listen to Josuhua Salaam during the Islam Q&A session.

Political tensions and social differences have been felt throughout countless communities in America during the course of 2017. Students at Woodgrove are working hard to fight these issues by creating two new clubs, STAMP and Students United. Through their work, these clubs are aiming to create a school and community environment where people are no longer stereotyped and awareness is raised for minority groups.

STAMP, or Students Together Against Marginalizing People, was created by seniors Katie Cox and MK Ntantang in response the tensions and violence seen in the media today due to cultural misunderstandings and stereotypes.

“STAMP club’s mission is to educate the public in a way that emphasizes the nonpartisan aspect of social activism because we see a lot of people that associate social activism with the left, but in reality it’s important to note that social equality should be important to everyone across the political spectrum, from republicans to democrats,” says STAMP leader, Katie Cox.

To advocate their cause, the club has already successfully gathered donations for LAWS, a local women’s shelter, and held a movie night to call attention to the persecution of different groups around the world. The movie night showed 40 Years of Silence, featuring Degung Santikarma, survivor of the Indonesian genocide and father of sophomore Devin Santikarma. Along with 40 Years of Silence, Near Normal Man was played, which is the story of Ben Stern, Holocaust survivor and great-great-uncle of junior Dani Kimbrough and freshmen Pierce Kimbrough. The movie night exceeded the club’s expectations, raising 200 dollars in ticket sales.

“I feel like both me and Dani’s movies dealt with the same ideas, which is recovering and moving on from tragedy. I feel like the best thing to take away from it is that instead of trying to erase the past, and forget about whatever happened, you should embrace it and remember it, and forgive the people. So forgive, but don’t forget,” says Devin Santikarma.

The club is currently planning to host a winter banquet where the proceeds from ticket sales will go to local charities, and will be holding panel discussions and student conferences during Dentime where speakers will talk about current social issues.

Students United, another club was formed by sophomores Maryam Khan and Andrew Rishmawi in the 2017 school year to encourage diversity and cultural awareness at Woodgrove and to show students at Woodgrove that they belong.

As their fall project, Students United is working on a board to go on display in the front of the school representing where everyone from the school comes from. In their meetings, they prepare for upcoming events, including International Night in March. But the club does not just reach out to the Woodgrove community, they are also currently planning to help those who are homeless around the Washington area, and partner with a charity.

The club has quickly gained members, including junior Michael Mckim. “It was the opportunity to help change the school’s image and help it become more accepting of diversity that drew me to the club,” says Mckim.

Both clubs will continue to promote change and diversity as they plan more events to promote their cause. The need for change has become evident to members of the two clubs, like STAMP member Dani Kimbrough.