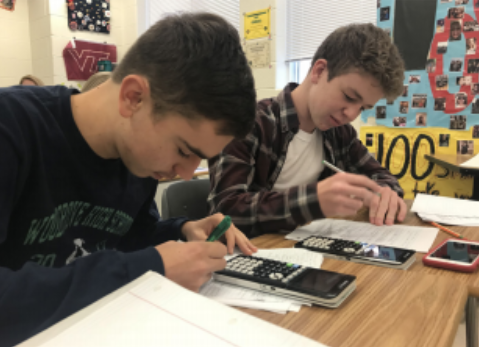 Woodgrove High School is well-known for its academic standards. Unfortunately, the pride of maintaining this honorable reputation can add to students’ stress levels. A high percentage of students take heavy course loads to push themselves academically, but many students also admit to feeling the pressure from their parents, teachers, counselors, and even peers to take more upper level courses at the expense of taking classes they enjoy.

Taking difficult classes such as AP and Dual Enrollment courses provides Loudoun students with GPA boosts and also gives a boost to the school’s reputation overall. These GPA boosts may seem insignificant, but in the big picture, they often make the biggest impact. Students are presented with heavy competition, down to the last hundredth of a GPA point, and many students willingly take the classes to stay competitive for class rank and college admissions. Others, however, feel pressured to do so even if their interests and talents lie in areas of elective courses which do not provide a GPA boost.

Art Teacher Sean Grove says, “I think many kids are really being pushed to take these AP courses. Students may dive into an AP course with the expectation that it will be the same difficulty level as a previous class, but once they see that it may be too difficult for them, they often want to drop it.”

From the viewpoint of Woodgrove students, some feel restricted by an expectation to take a certain amount of honors or AP classes. Counselors are in a difficult position in that they advise students to have a balanced schedule, but they also have to counsel students to take the most rigorous course load expected by college admissions officers. Sometimes, this leads to students taking fewer electives and more academic classes for fear of ruining their chance of admission.

Freshman Ellee Pyle says, “In the beginning of the year, it was really bad transitioning from middle school to high school, and so I was like, ‘I should probably take a step back and take an academic class.” Pyle’s parents, both educators, conferred with three counselors from different schools about the possibility, and two out of the three discouraged the move. “They said if you make the change, then UVA is probably not going to want you. I thought it was a little ridiculous that something I would do as a 14 year- old was already going to affect what I do at a college,” Pyle said.

Along with the push for students to take more higher-level classes, the push for science and math relating courses, or STEM classes, seems to be growing as well. English teacher Chris Cuozzo agreed saying, “I think we’ve had a wave in the last ten years to focus on STEM that has put less priority on humanities.” This STEM push may alienate students who do not want to be on this path. The two sides often caught up in the reputation, parents and teachers, might not realize that students are not always the best equipped to handle and balance hard level courses with outside of school activities.

Sometimes, there is pressure on students to avoid taking electives altogether, even if it means giving up a course they love. Woodgrove graduate and Bridgewater Freshman Cameron Terrell says, “At the end of my junior year when I was choosing my classes for senior year, I was talked out of taking AP Art because I wasn’t planning on going anywhere with it after high school. I was convinced to take another science class instead. After the year started, I knew I belonged in the art room and made the choice to switch. I’m glad I did because I know I would have always regretted not taking art.”

As a counselor who has seen students struggle in a variety of different classes, Woodgrove Counselor Astrid Willemsma says that it’s not just parents and counselors who advise the students, but it’s often the desire of students, themselves, who wish to take similar course loads as their friends. “Sometimes, it’s simply the peer pressure of hearing friends say, ‘I’m taking this class,’ and ‘I’m taking that class’ that can do it,” she said.