The Woodgrove Outlander • May 21, 2018 • https://www.thewoodgroveoutlander.com/features/2018/05/21/official-cappies-review-of-woodgroves-the-addams-family/ 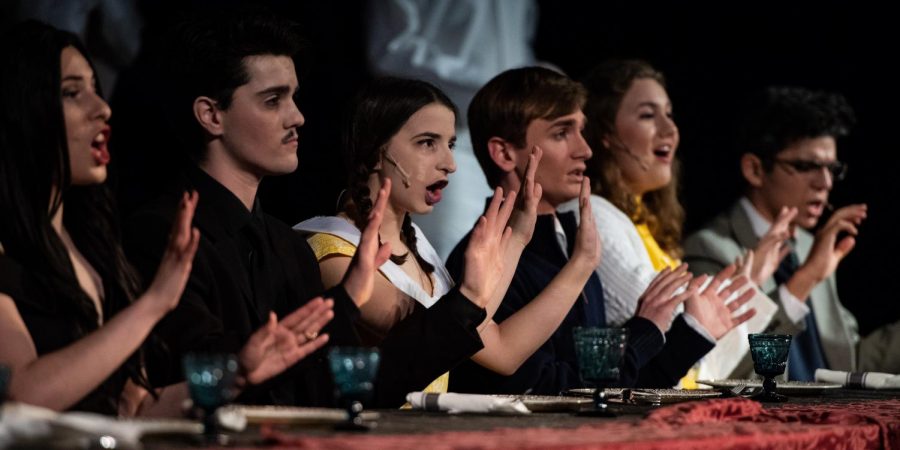 Written by Special to the Woodgrove Outlander: Leah Incan

Badadadum snap snap badadadum snap snap badadadum badadadum badadadum snap snap. Sound familiar? Then you must be a fan of the gruesomely wonderful Addams Family. The family everyone grew to love and enjoy was turned into a musical with music by Andrew Lippa and the book created by Marshall Brickman and Rick Elice. The show was first performed on Broadway in 2010. The story takes our little Wednesday Addams and places her in early adulthood. She’s found love and is trying to keep it a secret from her mother until the families meet. With all the awkwardness that a first time dinner party provides, Woodgrove High School performed a great rendition of The Addams Family.

What is a family without the mother? The lovely Morticia Addams was played by Carolina Kirkpatrick. Kirkpatrick was delightfully gloomy and deliciously scandalous in her role as Morticia. She embodied the sexiness as well as classiness of a well known character. Her articulation was on point and tonal quality matched with precision. Her most notable moments were her duets with Gomez Addams played by Lucas D’Errico. Their chemistry was on fire and D’Errico as the Latin lover did not disappoint.

D’Errico did an excellent portrayal of Gomez. His use of comedic timing and facial expressions provided fantastic insight into what he was really thinking. D’Errico’s most notable feature was his ability to keep a strong accent throughout the whole show. From lines to songs, his voice did not waver. Despite the thickness of his accent, he still managed to provide beautiful renditions of songs like “Trapped” and “Happy/Sad”.

Costumes and makeup set the tone for the show. Each ancestor looked extremely unique, with every character representing a different style or era, and yet thematically similar with the all white color palette. Makeup provided a deliciously eerie effect, with gaunt cheeks and over-accented dark circles – the living dead was up on that stage. The orchestra did an excellent job of balancing volume with the actors’ voices, while the recorded sound effects were consistently on cue and helped add to the overall performance. Woodgrove High School’s The  Addams Family was a comedic delight from start to finish.