Woodgrove Presents “Beauty and the Beast” 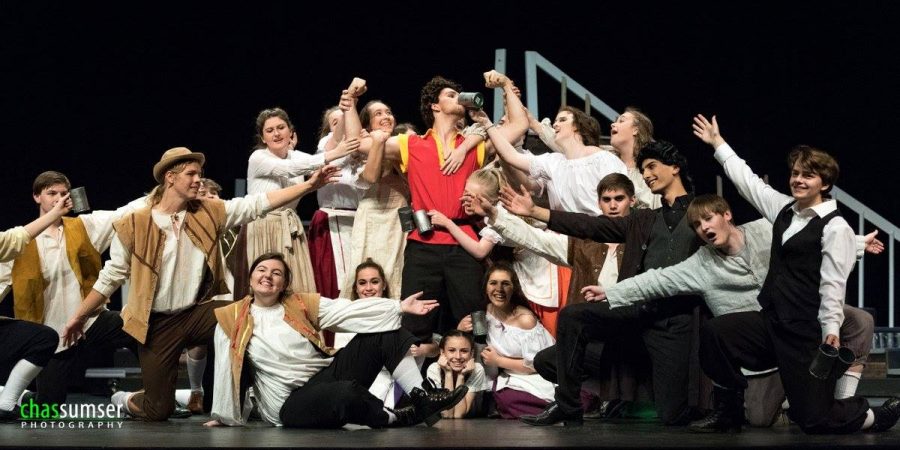 The Woodgrove High School Theatre department will be presenting “Beauty and the Beast” on April 21, 22, 28, 29 at 7 PM and on April 22 and 29 at 2 PM. Woodgrove High School will also host a “Tea with Belle” at 12:30-1:15 on April 22. The Tea with Belle will have a $15 fee which includes a matinee ticket and to a tea admission to visit Belle, Lumiere, Mrs. Potts, Chip, and the creatures of the show and get autographs before the show.

This high-quality high school musical features 36 young actors and actresses. The musical stars junior Lauren Bogle as Belle, junior Jon Wilkerson playing the Beast, and sophomore Kevin Crandall playing the Prince. The musical is a classic fairy tale about a prince who turns into a beast and keeps a prisoner in his castle. The prisoner’s daughter goes off to find him, where she eventually, she finds her father and meets the beast. While she’s a prisoner at the castle, she falls in love with the beast.

Bogle, who was been acting since she was in elementary school, said that getting the role of Belle was very special to her and made her childhood dream come true.

“I maybe cried a little bit, childhood dreams coming true, then went to call my parents. That was a good day, to say the least,” Bogle said.

Along with Bogle, Crandall is looking forward to the play.

“This is the first musical I have done, so I’m excited for performing in the musical. This was also my first time auditioning for something like this, so it was awesome to find out that I got the part of the Prince,” Crandall said.

Drama teacher David Noland said that the Tea with Belle is an opportunity for children of the community to meet the characters and have a generally great time.

“Tea with Belle is an opportunity for younger audiences to get a meet and greet with the characters of the play and hang out, take pictures, ask questions, seek autographs and have a generally good time,” said Noland.

“We wanted to reach out to the community and make the experience more memorable for parents and their children.”

Freshmen Julia Condie, playing one of the ‘Silly Girls’, said, “The tea party is a great way to raise money for the drama department and for the kids and other people in the community to gain exposure to the drama. Also, I’m looking forward to seeing the set come together to see the full picture on stage.”

Noland said that each opportunity that an actor has could be “the” opportunity.

“We never know who is watching. Any chance to master our craft is a chance we may not see again. All of the students in the musical are doing a fantastic job and are super excited to bring this to life,” Noland said.

According to Noland, the musical of Beauty and the Beast will entertain everyone who attends and will have a great time.

“Acting that is current and focuses on believability, singing that entertains the ears and ask those in the audience to sing along, choreography that is engaging and entertaining, and some secret special effect you’re bound to love.”