A Turning of Events: The Recent Storming of the Washington Capitol is an Event That Will Go Down in U.S. History 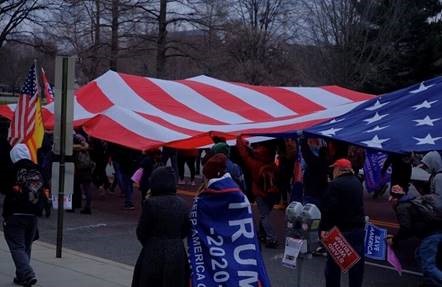 Red MAGA hats and paraphernalia covered the grounds of the Capitol as devout President Trump supporters took a stand against what they thought to be an unfair election on Wednesday afternoon. False Presidential allegations encouraged a riot to form out of what was initially believed to be a peaceful march. The protest quickly escalated into violence leaving four people dead.

One of the most iconic buildings, the Capitol, was a target for rioters as Congress was set to confirm November’s election results on January 6th. For the first time since 1812, mobs breached security of the Capitol, freely roaming the complex, with many rioters armed and openly violent by breaking windows, damaging or stealing federal property, and threatening lawmakers within the building.

In a viral photo, one man can be seen inside the office of the Speaker of the House, Nancy Pelosi, with his boot up on her desk. He and many others looted items from her office.

Meanwhile, Congress members were sent to shield themselves from the havoc as threatening messages were shouted throughout the hallways.

Woodgrove senior, Samuel Biby, was near the Capitol during the event as a non-affiliated bystander. “When I got to the front of the Capitol, there were men climbing the scaffolding and the sides of the buildings. The rioters were setting off firecrackers, which soon turned into gun shots. I saw a man on the scaffolding shoot off his pistol into the air several times to excite the crowd. Suddenly the shouts of the crowd grew louder, and a man with a loud microphone asked ‘patriots’ to enter the Capitol,” says Biby.

As America waited to hear from the President, the violence and destruction continued to escalate when tear gas was fired into the crowd. Eventually, President-elect Joe Biden gave a televised speech attempting to call off the chaos and encouraged the President to condemn the riots as well.

After receiving numerous pleas from allied congress members and aides, the President released a video, ordering his supporters to go home. “Go home, we love you, you are very special,” said the president while additionally repeating, “The election was stolen from us.”

After the crowds settled later that evening, Congress resumed counting votes. Some Republican members who had planned on voting in objection of the election’s legitimacy ended up rethinking their decisions after seeing the events of the day unfold. Former U.S. senator from Georgia, Kelly Loeffler, was one of these participants. “When I arrived in Washington this morning, I fully intended to object to the certification of the electoral votes. However, the events that have transpired today have forced me to reconsider and I cannot now, in good conscience, object,” said Loeffler.

On Thursday morning, Congress confirmed the victory of President-elect Joe Biden. President Trump responded with a statement saying, “Even though I totally disagree with the outcome of the election, and the facts bear me out, nevertheless there will be an orderly transition on January 20th.”

In the aftermath of Wednesday’s events, many Americans and lawmakers are expressing their shock and disappointment in President Donald Trump’s rhetoric, believed to spawn the riots.  As a result, the head of the Democratic party in the Senate is unofficially calling to invoke the 25th amendment. If this were to proceed, President Trump would be removed from office and Vice President Pence would take his place.