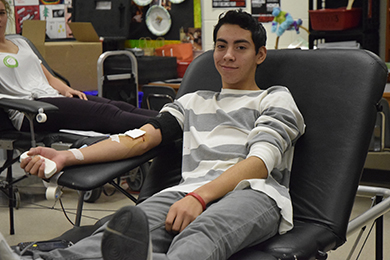 The Woodgrove High School National Honor Society held a blood drive on November 17, 2016, in conjunction with the American Red Cross. This is a biannual event being held both spring and fall. Previously it was just held in the spring but under new leadership they have decided to expand the collection to twice a year.

NHS sponsor Mrs. Andrea Elbaum said, “We’ve made it our own after taking it over, and I think the more people who care about it, the more who will donate.”

The Red Cross stockpiles the blood collected and then sends it where it is needed. All the blood given at Woodgrove High School stays in the region, going directly to the hospitals in the area where it is needed. Those who donated felt it would help their community and benefit people around them in need.

“If 20 minutes of your life could help save another, why wouldn’t you do it?” said Junior Juan Garcia who donated blood at the event.

The NHS had several goals before the blood drive started but mainly they wanted to get as many donations as they could. At the end of the fall event more than 50 people donated.

NHS President Jake Rodal said about their goals, “Our main goal was to fill our sheets and get as many people as possible to donate and we did that.”