The Woodgrove Outlander • May 22, 2018 • https://www.thewoodgroveoutlander.com/news/student-news/2018/05/22/were-all-human-hosts-its-third-annual-walk-at-woodgrove-high-school/ 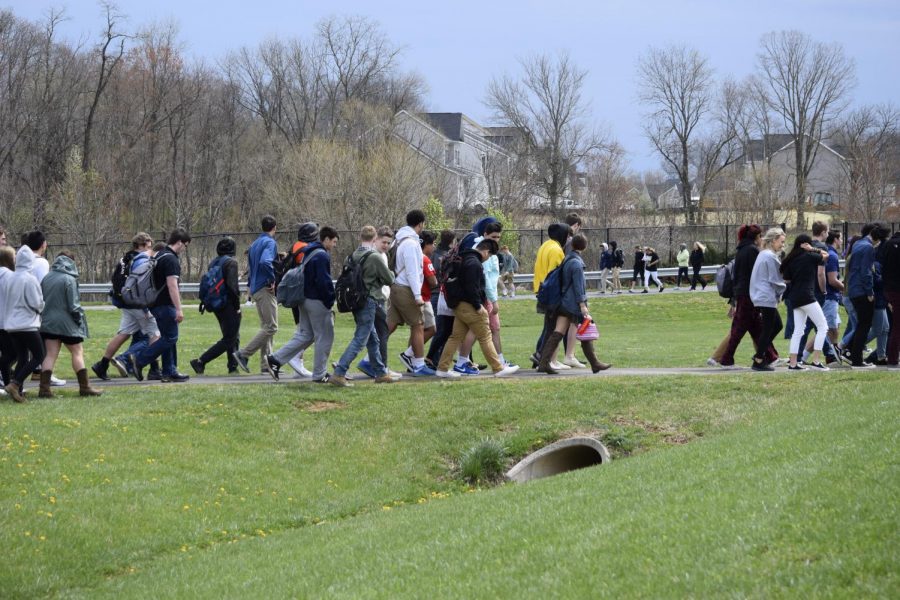 Woodgrove High School commemorated the third annual walk on Thursday, April 19th to curb teen suicide and promote mental health awareness amongst students. The event was sponsored by We’re All Human, The Ryan Bartel Foundation, and Sources of Strength Project, all organizations with the intent of reminding teenagers that they are not alone in their personal struggles and are surrounded by people in their lives that can help them should they need it. According to the Loudoun Times Mirror, Woodgrove was one of the six schools in Loudoun County to host a We’re All Human walk this year.

In the past two years, We’re All Human, supported by the Ryan Bartel Foundation, has held walks with the key element being communication in the community with regards to teen suicide. Suzie Bartel, the founder of the Ryan Bartel Foundation, and the mother of Ryan Bartel,  a 17 year-old Woodgrove student who took his own life as a junior three and a half years ago, firmly believes that students can help prevent tragedies such as Ryan’s death by talking about these complex issues and relating to one another.

The first walk in 2016 was marked by the trauma over the loss of Ryan and the event was very emotional and raw as the topic of suicide was addressed directly. The walks in 2017 and 2018 tried to emphasize strategies of recovery and coping skills as organizers focused on positive stories of strength and healing instead of sadness and trauma in an effort to make suicide prevention more effective. Suzie Bartel believes that especially the walk in April 2018, with the Sources of Strength stations that students stopped by on their walk representing different strengths to use in all aspect of life, helped focus on various coping strategies and skills, keeping the event positive and providing hope for struggling students.

“It was more uplifting and the focal point was more on recovery, using coping skills and our different sources of strengths when we go through difficult times,” She added that she hopes that the event made people feel closer to each other, more mindful of what others might be going through, and to remember that everyone matters.

The sentiment of Bartell is shared by Rita Frie, a Junior at Woodgrove, who is one of the student organizers of the We are All Human walks at Woodgrove. Frie got involved with We”re All Humans after the walk of her Freshman Year.

“I had recently lost a friend and I wanted to join something that would help make an impact in our community,” Frie said.

Frie, just like Bartel, feels like the most recent walk went very well, and she would not change anything in the way it was planned. She encourages fellow students to join We’re All Human to share their ideas, experiences and support to make Woodgrove a better place.

Fellow We’re All Human members Addison Halveland and Kimberly Engel, both Woodgrove Sophomores, feel that it has been an incredible experience being part of the organization and emphasize the importance of the organization’s focus of letting people know they are not alone, while giving them coping skills to overcome their struggles.

Many Woodgrove students showed up for the walk this year, despite blustery winds and brisk temperatures. Sophomore Max White participated as he felt it was an important event, helping students who are feeling down.

“Many people don’t really feel good about themselves and it is good for them to know that somebody cares about them,” Max said.

Mrs. Bartel started the We’re All Human organization in her son Ryan’s honor and its message of hope lives on in the hallways and classrooms of Woodgrove where students might feel inspired by the walk to reach out to a peer who is struggling or rely on a friend or trusted adult to be a soft place to fall. Bartel stresses the importance of kindness towards one another, as no one is immune to depression and suicidal thoughts.

“Never judge and always be kind, respectful and supportive, because one kind word can save someone’s life,” she concludes.

(To become involved in We’re All Human, students can reach out to counselor Barbara Bell or school psychologist Heidi Buckner, who sponsor the club, or contact any of the current student members.)