The Woodgrove Outlander • May 19, 2018 • https://www.thewoodgroveoutlander.com/top-stories/2018/05/19/love-in-lovettsville-event-to-combat-hate-in-the-community/

Love in Lovettsville Event to Combat Hate in the Community 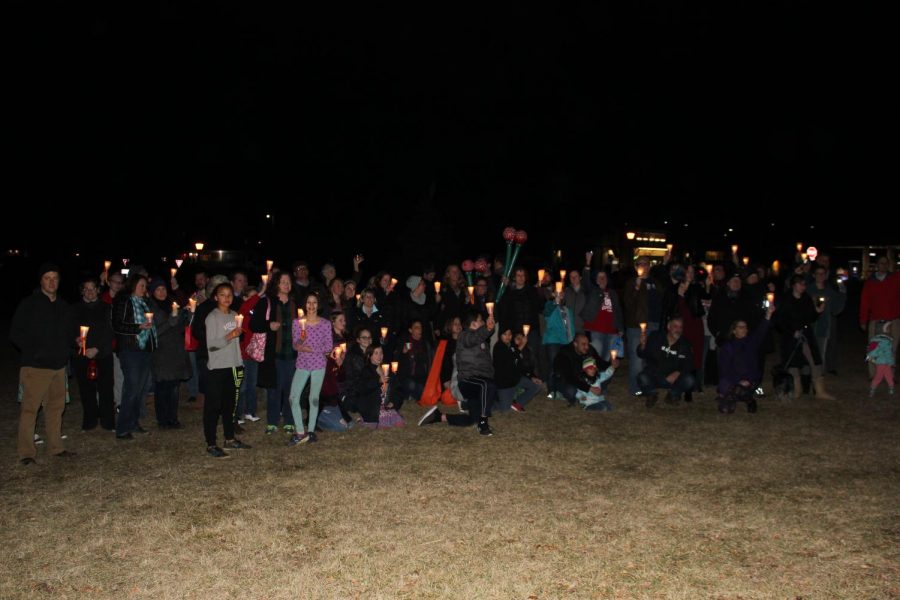 Lovettsville community members gather together with their makeshift candles.

Written by Madeleine Heffern: Special to The Outlander

The second annual “Love in Lovettsville” event took place on Valentines Day in the town’s main square to address KKK recruitment flyers dropped in the area.

KKK (Klu Klux Klan) recruitment fliers containing racist messages were dropped in New Town Meadows, a development in Lovettsville, on the previous Sunday. The fliers were discovered Monday morning by children on their way to school and by early morning commuters. There had been multiple similar instances throughout Loudoun County, but the residents of Lovettsville were still shocked that someone had the audacity to commit a hate crime in such a quiet happy town.

The townsfolk of Lovettsville organized a “Love in Lovettsville” event. The air was cold, and the night was dark, but nevertheless a total of around 50 people showed up. The event kicked off at 7:00, when the main organizer, Kaarin Nelson, gave a short statement standing on a park bench. Nelson said that it was “Really important that we realize what ugly is going on here.”

After Nelson stepped down from the bench, makeshift candles were handed out. They were candlesticks with Solo cups taped around them, but they did a great job blocking out the wind, and providing some light. The participants took a few laps around the town square and afterwards people stayed behind to talk to their neighbors. The conversation remained positive, and the last stragglers had left by 8:13.

The event sparked interest in Ms. Erica Aldrich Reck, who is the leader of a Girl Scout troop in the area. Reck and her daughter were reading through the paper, when they found an article about Purcellville residents bearing orange ribbons to show love for their neighbors. Reck’s daughter looked at her mom and told her she wanted to do something like that too. And thus, the orange ribbons in Lovettsville began. The Girl Scouts have been handing out orange ribbons, and placing them in supporting local restaurants, such as Rasco’s.

From there, the idea spread like wildfire. Driving through Lovettsville one can see ribbons tied on many doorknobs, and not just ribbons too. The girl scouts also painted adorable kindness rocks, and hid them in nooks and crannies all over town to pleasantly surprise the unsuspecting pedestrian. Reck said it was important to remember that, “The only way we can beat hate is to love.”

Mayor of Lovettsville Bobby Zoldos said,“I’d like people to know that we’re on top of this.” He also stated that we should not worry and that “The only way for this to go away is if we stop spreading their message and let them die out.” The Ku Klux Klan currently only has a handful of members left, and if we let them fizz out, they will most likely never come back again.

Many left the “Love in Lovettsville” event with a feeling of connectedness and happiness, and the feeling that surely things would get better from here on out. Little did we know, on that same day, something terrible took place, and seventeen lives were lost down in Parkland, Florida.